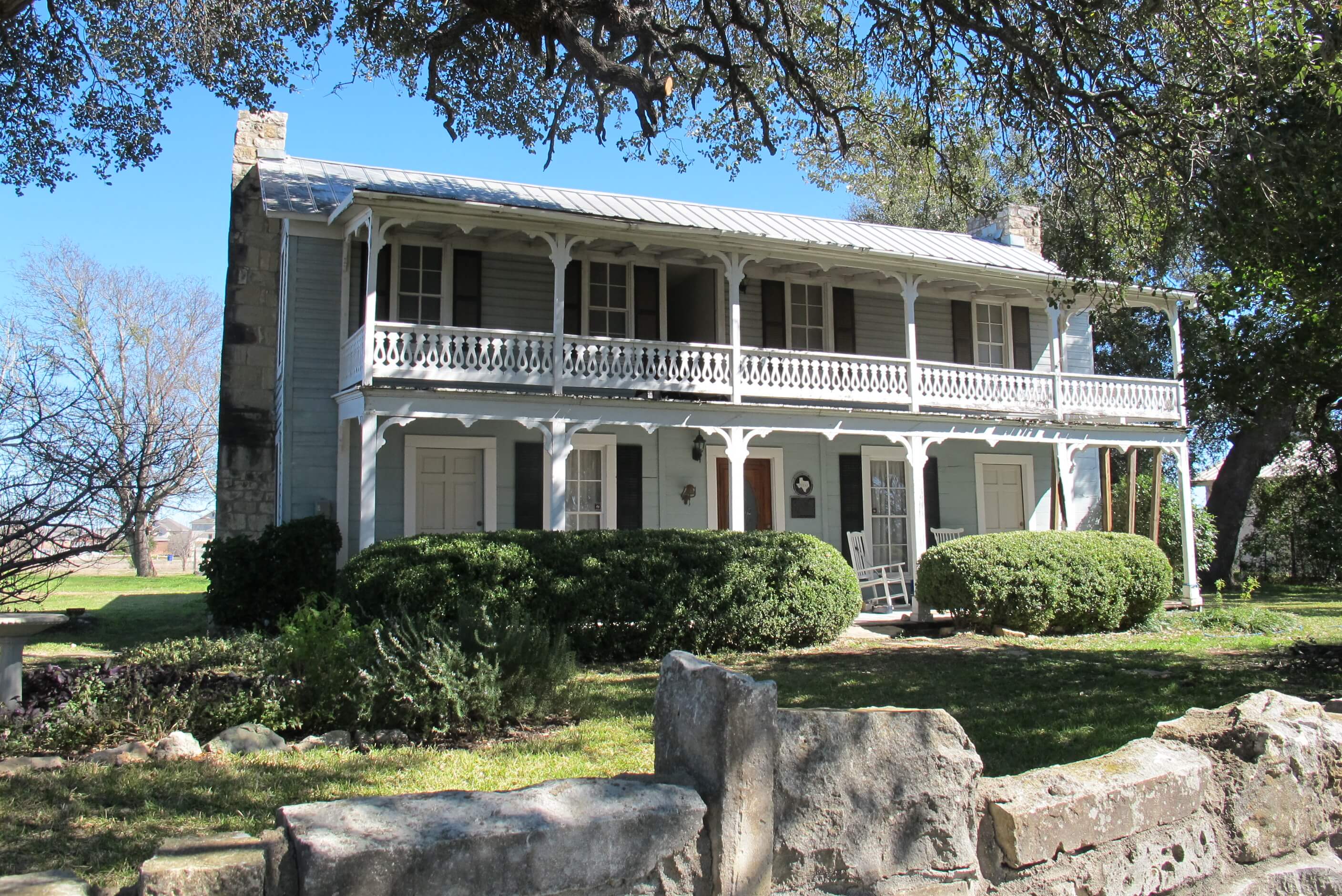 SOLD! 600 S Bagdad Rd Leander Texas 78641 is a beautiful Victorian Recorded Texas Historic Landmark home on slightly less than 1 acre lot Betty Saenz SOLD. Betty Saenz had the property listed for sale. This historic home was built in approximately 1866 and is known as the AS Mason House. The home is a symmetrical Victorian home characteristic of the five bay farmhouse homes built in the Central Texas area and in this period of Texas history. The home has 2 stories with 2 limestone chimneys on either end of the outside and a double galleried front porch with six square columns with brackets and jigsaw cut balustrades with four over four windows. Inside there are two fireplaces – a wood burning fireplace on each end of the first floor. The 2 fireplaces have black metal Summer covers to close them up after use. Here is a short video of the kitchen. More videos coming soon. The home has 1888 square feet per the Williamson County Appraisal District and has three bedrooms, a nursery or office, living room, dining room, utility room, kitchen and covered porch. Betty Saenz held an OPEN HOUSE Saturday February 20th from 1:00pm to 4:00pm and had about 50 people or more come see this relic from the ghost town of Bagdad Texas! The interest in this Texas Historic Home has been phenomenal. Austin TX MLS number 7751080 in Residential and MLS number 4441088 Commercial

Living room with crackling fire going in the fireplace

600 Bagdad Road S Leander TX 78641 was built back in 1866 when this area of Leander Texas was a small Texas town called Bagdad, named after the hometown of an early settler Bagdad Tennessee. Settlers starting coming to the area destined to become Bagdad Texas in the 1840’s. The settlement grew and soon the town of Bagdad Texas was surveyed in 1854 with the Bagdad Post Office being established in the following year. Bagdad is now part of Leander Texas. Known as the A.S. Mason Home, a farmer named Alpheus S Mason had this home built by Huffstutler Builders of Georgetown Texas. Alpheus was the son of Colonel C.C. Mason who was an early settler of Bagdad and had some stores there. The modern day Bagdad Road was once a well traveled military and stagecoach road in old Bagdad Texas. Leander Texas was established later in 1882 about one mile to the east because Bagdad did not want the rail. Leander grew and Bagdad met its demise. Now the ghost town of Bagdad TX and neighboring Leander Texas have merged. Owning, restoring and maintaining this home will preserve one of the most significant of the very few remaining historic homes in Leander Texas. The book Land of Good Water by Clara Stearns Scarbrough has a lot of information about the old town of Bagdad Texas and the Mason family. I am so excited that the Austin American Statesman featured this home in a Saturday February 20th 2016 article it ran in the Statesman Homes section entitled Leander’s Charms Include Historical Sites, Youthful Vibe. Here is a photo of Mr. Heezon’s model he built of the home. The model is on display at the Leander Chamber of Commerce. 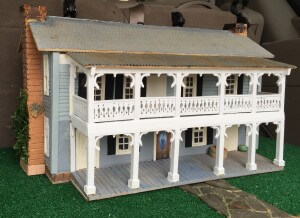 Colonel C.C. Mason, Alpheus Mason’s father is credited with being the main figure in starting the old Bagdad Texas school. The Bagdad School then became the Leander School. Now Leander Independent School District or LISD is one of the biggest school districts in the Austin Texas area serving children of Leander, Cedar Park and some areas in Austin TX. Colonel C.C. Mason has a school named after him because of this called CC Mason Elementary, nearby on Lakeline. LISD is well liked and as you know- great schools mean a lot to not only families with school aged children but also for property values.

This Historic Home in Leander, Williamson County Texas can remain residential or go into a commercial use. The City of Leander has the property zoned LC – 2B so allowable uses are to continue as residential or change to a B and B, restaurant, offices, school or day care, retail sales or services, nursery or greenhouse and more. Contact Sellers REALTOR Betty Saenz at 512-785-5050 or by e-mail for information on allowed commercial uses per the City of Leander or contact the City of Leander Planning Department directly at (512) 528-2763. The home is on City of Leander water and in the Upper Brushy Creek Water Utility District with Pedernales Electric Co Op or PEC for electricity. Although the home is currently on a septic system, city sewer is located nearby and we have an estimate on cost to hook up to city sewer from the City of Leander. There is an old hand dug water well on site that is original to the home. It is not known if it has water in it since the well is covered.

Across the road from this historic home at 600 Bagdad S is the 16 acre Robin Bledsoe Park with Junior Olympic Pool, playscapes, ball fields, hiking trail, amphitheater, restrooms and more. To the north and east are undeveloped fields designated as parkland per the City of Leander and do show up on the survey. To the south is a City of Leander owned lift station in a beautiful small building. Leander Texas is a fast growing Texas City of about 35,000 people located in both Williamson and Travis counties just north of Cedar Park Texas and Austin Texas. Leander Texas is home to the Leander Station, a Capital Metro 13 acre transportation hub in the Leander TOD or Transportation Oriented Development located across from the HEB Plus grocery store with a lake, hiking trail and parking lot for people using Capital Metro busses or the Capital Metro commuter rail into Austin Texas.

Call or e-mail Betty Saenz listing REALTOR at 512-785-5050 for more information on selling your historic home or to set up an appointment to meet with Betty Saenz to sell your Historic Home. We received multiple offers within one week on the market for 600 S Bagdad Road Leander Texas 78641. I am proud to have helped save this old home as it was part of Bagdad Texas so long ago!