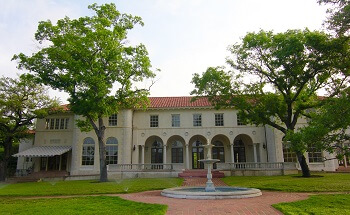 The Austin American-Statesman reported in June 2017, that the Commodore Perry Estate will be developed into a 53-room luxury boutique hotel. The 1920’s mansion has passed through several phases – first serving as the residence of the Perry family, the estate then served as a Catholic girls school, and mostly recently, a learning center for an Indian guru. While the original mansion will remain, two of the school buildings will be torn down to make room for the hotel. The mansion will continue to be used as a venue for weddings, receptions, and other public events.

Edgar Howard “Commodore” Perry was born in 1876 in Caldwell, Texas and graduated from Baylor University. Commodore Perry came to Austin in 1904. He started a very successful business shipping cotton from Taylor, Texas in Williamson County to Europe until 1929. He was also known as a long-time real estate developer in Austin who built the Commodore Perry Hotel (now an office building at 802 Brazos), developed the Highland Park West subdivision in northwest Austin, the Perry-Brooks Office Building, and was a partner in the Stephen F. Austin hotel downtown. This was a man that seems to have had endless energy and the ability to really make things happen in Austin until his passing in 1964. 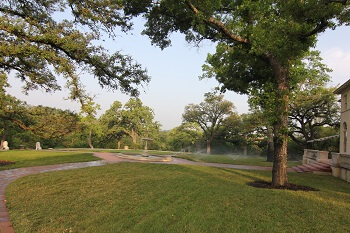 Commodore Perry and his wife, Lutie, built the mansion and estate now known as the Perry Estate in 1928. This 10,800 square foot home built on 10 acres symbolizes the optimism and extravagance of the “Great Gatsby” era known as the “Roaring 20’s”. Stories from the time report that Mr. Perry was playing golf at the Hancock Golf Course, then known as the Austin Country Club when he noticed the gravel pit across the street. Always mindful of improving the appearance of a community, he purchased the 10 acre site and hired the prominent Dallas architect, Henry Bowers Thomson. The Mediterranean villa style mansion had a guest house, swimming pool, bowling alley, green house, six-car garage, a formal hillside garden with a marble fountain, and sunken garden with a mirror pool. Waller Creek flowed on the west side of the property.

The Perry Mansion greets you with numerous arches entering a long open-air porch called a loggia. Once in the front entrance, a long hallway opens into all the major rooms of the lower floor. On the right, the living room with a large limestone fireplace and then through ornate iron doorways is the solarium on the east end of the house. On the left, the walnut-paneled formal dining room opens into the breakfast room and kitchen. There is an oval-shaped library located on the lower east area balanced by an oval spiral staircase room on the lower west side. The second floor includes a number of beautifully furnished bedrooms with fine inlaid details.

We shall be eagerly waiting to see the results of the new development. If you’re interested in learning more about purchasing a historic home in the greater Austin metro area or Central Texas, please don’t hesitate to contact Betty Saenz today.